Scroll down for larger picture! 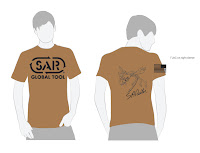 I will be offering a t-shirt, I have never offered a t-shirt under the "SAR Global Tool" label. They of course will be of the highest quality and the design is rocking a little bit of the old SAR and the New SAR.

Front of the shirt will be the SAR oval arrow logo with Global Tool with the circle r which I am very proud to be a "Registered company in the U.S.. The back will have the Skeleton Hornet which is the very design that put me on the map and help pave the way to where I am now. Also the Hornet XL production knife is being offered one last time and is going fast if you are interested in getting one go to POHLForce USA talk to Phil and he will square you away. My signature logo below the Hornet only goes on my 'Top shelf" or prototype knives and gear. On the right shoulder will be the reverse American flag and will be offered in Tan and O.D. Green color shirts of the best quality stock I can afford.

The logo's will be one color (black).

Mitchell Martin of Gator Graphics Gator Graphics is doing the work. He is a really awesome and respected artist who is local to Louisiana. He has been making shirts for my partner John Hurth that runs TYR Group LLC which is a world class "Visual Combat Tracking" school and I have had the pleasure of seeing the quality and care that goes into John shirts he offers through his Webpage

Last time I had shirts or swag was back in 2007 and things are changing with more coming down the pipe. If you are interested in a shirt please send me your size and color Tan or O.D. Green and I will place you in the pending file and contact you with payment info when they come available spencer@sarglobaltool.com . I want to make some in Pink for the ladies as well so come on ladies and get some let me know please 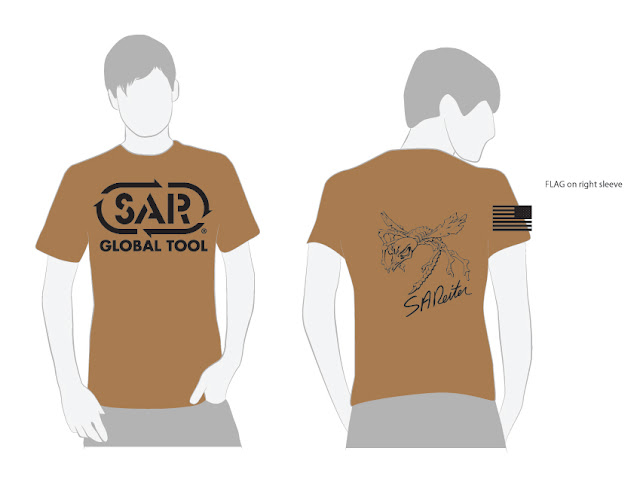 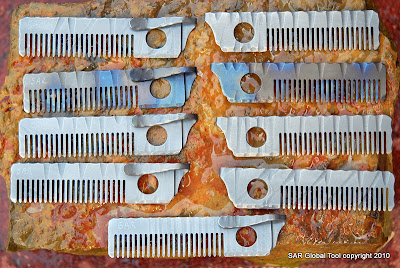 I have combs in stock at the web store ready to ship. I also have a new version the "ACE" pocket comb in limited numbers ready to go as well. I also have put put three different finish versions of the pocket comb with clip up as well. Everything in in real time stock and when it says this item cannot be ordered it means I am out! 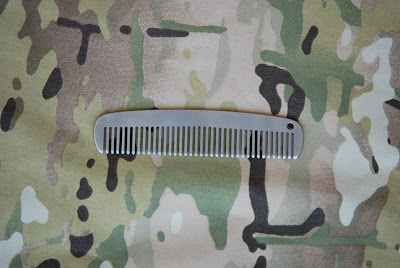 Back story on how the ACE pocket comb came to be. In 2011 a 3 letter agency came to me and wanted some pocket combs for field agents that worked in areas that they could not carry conventional weapons and needed items that would pass off as nothing but what it was....defensive in nature and sublime. Things like tactical pens, lightweight impact tools etc but even these could raise a eyebrow if seen. I often show people the comb and ask "What is it" they always reply "It's a comb" grinnnnnn ha ha. 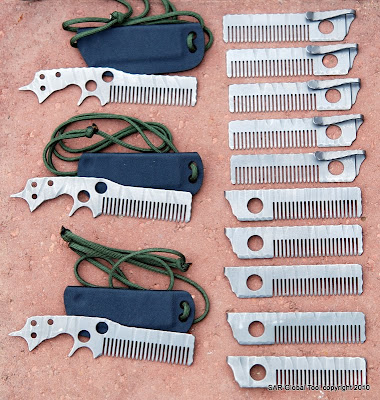 So they bought a few of the original pocket combs with the clip. After some testing they conducted they like what the comb could achieve in terms as defensive tool and the fact that it was a very nice grooming tool. The downside was the "Pocket Clip" they got profiled and often asked what kind of knife they had or why where they carrying a "Knife".

Upon reading the report they sent me I told them to hang tight. I took a old school original plastic ACE pocket comb made a drwaing and then with some modifactions to the "Tine" spacing and length of tines I had a prototype cut, sent to the shop and finished in short order.

I tested it in various ways, in numerous situations in a attempt to replicate what someone in that capacity would encounter. Handed off to a friend who had business in Washington D.C. this person would be passing through numerous security checkpoints. Some of these checkpoints with have a level of scrutiny that borders insanity due to the level of secrecy involved in these AO's. Only one in as many as twenty checkpoints did the comb get retained and not allowed to pass, the security officer that took a interest only did so when he handed the comb back and felt the tines and commented that this item was considered duel purpose, my tester acknowledge that fact. The security guy asked him where is came from and he said it was a gift from his mother and he did not know were she ordered it from. It made it through security at a strip club that forbids any types of items except for crisp one dollar bills...ha ha. It really is in the end a COMB so there it is there?

Once my testing was complete I sent a report and the prototype to the agency. They put it through a battery of test and came back with a nice little order and a thanks for developing a much needed item that could prove to save the day. If it as ever been used by them I will never know, but just the thought of making a difference is reward alone. 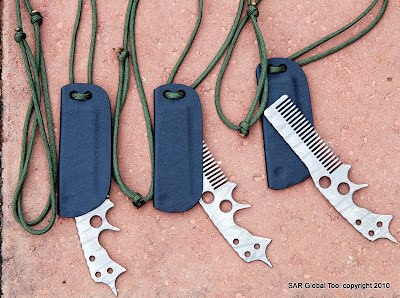 Also I hear people complain about the price and I will just say that I do my best to bring a honest price for a good tool. I have to have the comb water jetted which to begin with is not cheap, at the moment I am looking at a new water jet cutter but the place I go does such a good job paying the price they ask is worth it. The fact will always remain that 6LA4V MILSPEC Titanium is very expensive and extremely difficult to work with.  Also because I have to carry the overhead which sometimes is quite a bit I have to get the return to ensure I can keep them in stock. I assure you I am not getting rich selling pocket combs, I do it more as a service to my brothers in arms to keep the bad ass bearded guys looking good. In the end you will always get what you pay for!

Here are some links to various write ups and a video done by a good friend Mark Davies that runs a company called Tactical Edge that specializes in using uncommon things to achieve surprising results.

The best review to date by Mark Davies from the UK

Great review by a fellow "Bearded brother" and member of the world famous TBOC facebook group!

A review by my long haired brother from down under

This was they very first video I did to promote the SAR Global Tool pocket comb. Yes the background music is Said by Fred "I'm to sexy"...don't be a hater because you know its true....ha ha ha

Look for some updates as I begin to popoulate my webstore with edge tools for the very first time since I started the web store. Its pretty exciting for this to happen and has taken quite a bit of time to get to this point.

Thanks to all the folks that trust the gear I make and to any new customers I am always humbled by the comments and encouragement I receive and continue to receive. I will always strive to provide the best in customer service and that is non negotible if you should ever and I mean ever have a problem with my product just reach out to me by email or phone and I assure you we can figure something out.