Airborne
"Death From Above"

Yesterday I jumped my first jump since 2007. I Need to check my log but I have a meager 25+ Static line from High Performance military aircraft jumps. This time it was lots of fun and I am now working towards my Free Fall license.
Ranger Newt and I in 2004 on a cool jump from an old 50's Polish Reconnaissance Aircraft called a AN/2 COLT

I booked my first jump with Skydive Louisiana . The owner, Bill, was really cool guy and the staff was comprised of some veterans of various armed services and operational backgrounds.
Benjamen and I did some one on one training. Then we rigged up, and took a 25 minute ride in a little Cessna to 10,000' opened the door and jumped out. I performed six 90 degree turns and at 5,500' pulled the rip cord and also got to helped steer us into our landing zone. It is a requirement that your first jump be tandem and it is the only way to go in this kind of sport. One wrong move and you will become "Ice Cream For Crows". After returning for some ground school and four or five more jumps I will receive my license. The overall atmosphere was relaxed yet everyone was a top notch professional from pilot to the personal handling the appointments. All equipment was brand new and in a highly serviceable state and things just went very smooth.
I, also, used the opportunity to market my Knives and Survival Gear to Bill and his staff. Handed out about 20  SAR Eclipse Signal System video . Everyone fully understood how this little device could play a role in the day to day operations and the sport they pursue. If you have been jumping for any amount of time we all know you do not always land where you expect to!

My first jump at 10,000' was everything I expected and of course I want more. I am now wondering why I wait so long to do this.

When they gave me that Helmet and then I saw the pictures later...... well you can see that SGT Oddball from "Kelly's Hero's" handed in his Sherman tank for the Airborne/Ranger Infantry!

First one or Number one? 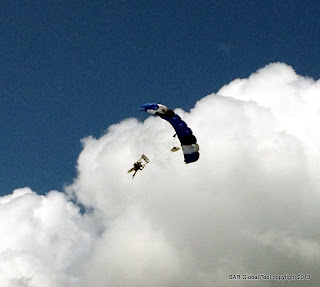 I will be trying to complete my certifacation in the next two months. Anyone that is local to me and would like to go up, let me know, we can share the ride, the experince and the gas

Stand by stuff is happening at SAR Global Tool. Rumor has it Blade 2014 will be the return.